Drawing from my feet

Art is about recognition, the identification through a continuous act of comparison in what we see, hear, touch. A chance combination can have surprising results and create something new.
Crossing the fine grained sands of a particular Welsh beach, I noticed how the motion of walking is generating an unusual sound. I am wearing thick soled boots, the movement of the fine sand is causing a clear whistle via the two independent substances and activity.

Many years ago I read:
Joseph Beuys thinks from his knees, his relationship to art was inseparable from his body which he represented through many differing substances, animal and mineral.

In How to explain paintings to a dead hare 1965, Beuys connected a childhood attraction; the presence of something that nobody noticed, together with an intuition of his own history and time. (Art Forum Summer 1991 p.85) 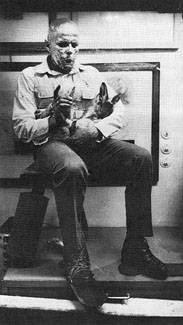 A moment of pure happenstance
It was exactly this same year my family rescued and nurtured an orphaned hare after seeing his mother killed. Beuys' art is influenced by being rescued and bought back to life by nomadic tribesmen. 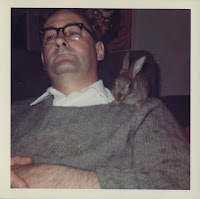 Dad and me and Sammy the rescued hare 1965

I walk, I look and occasionally find something unnoticed.
I work from my feet, connecting sounds, motion, terrain. I think through drawing as I focus on an unknown particularity. The act of drawing takes me elsewhere, each individual encounter continues to impact on memory.
‘When you give yourself to places, they give you yourself back’.
Rebecca Solnit in Wanderlust. 2002. London, Verso- p.13

A continually changing viewpoint cannot be understood by standing still. 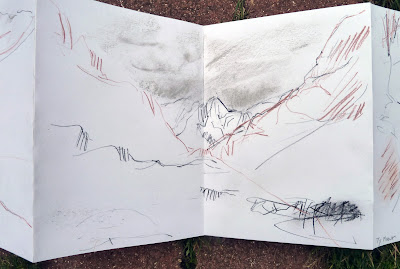 
I move a viewer beyond the role of motionless observer in
Snowdonia long drawing, continuing the process of its making and exploring the role of drawing as a residual object; it is necessary for a viewer to walk to view.
Here its form is dictated by the process of making but its reality is elsewhere in the mind of the observer.

Each viewer has absorbed and carries with them the multitude of differences of place or situation and frequently encounters these through unconscious reflection, they reveal a link to specific place.

In Snowdonia long drawing the constructed table reflects back into history, culture and place, through the materials used and its presence.

Like a good story endlessly retold, changing and gradually developing, I expect this blog and my drawing to continue on beyond the MA.

Sounds carry memories, sound evokes images, sound transports thought to another place.
Sound reflects activity, volume, terrain but has no image, no reality of its own.
Sound has presence but remains abstract.
Sound contains space.
Sound completely belongs to the listener alone. It exists nowhere else.
Susan Philipze:
‘ Sound heightens your awareness of the space you are in’. 2010
Sound relates volume, activity and movement, it contains landscape experiences that colour the unknown. We understand through connecting internal topographies of place, sound, image and knowledge. We navigate this terrain, adding and developing endlessly, our cognition is motion sensitive and site specific.

Snowdonia sound drawing - Jill Evans 2013
I record the actual walking experience of place to construct a sound image of terrain and motion.
The five active speakers allow a viewer/listener to choose their own pathway through Snowdonia sound drawing in their personal real time of listening. The viewer/listener passes through and creates an alternative composition to complete the drawing.
Visual sound drawing
This image is a sound wave formed by the sound activity of making Drawing 3 in real time sitting beside Ffynnon Llugwy reservoir. 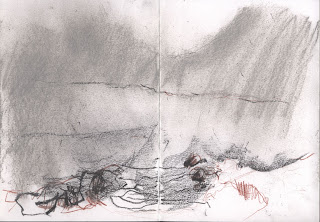 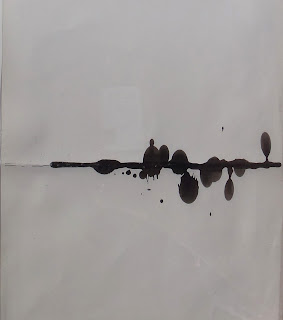 
This local sawmill uses oak, pine and other soft woods from the area of these walks and Surrey Wildlife Trust's own sites. In many cases these are heathlands where Scots pine is being removed for the revival of threatened wildlife, perfect.

The sound and sites of drawing and walking 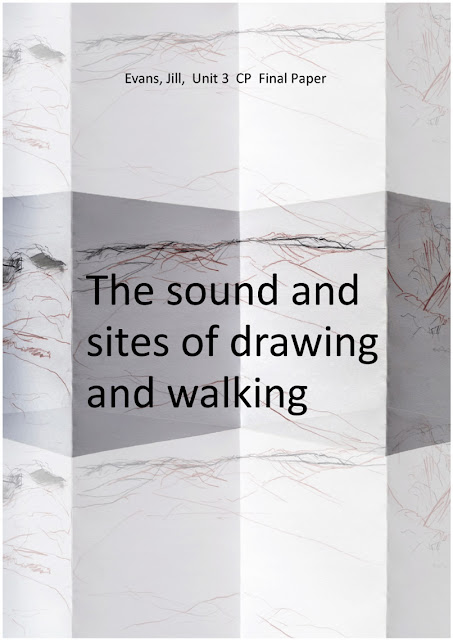 In the following words I shall tell the story of walking in Snowdonia over a four day stay in Capel Curig. I set off with clear intentions to experience walking in this remote landscape with the possibility of a diversion into somewhere unknown or a chance occurrence. As I move through this terrain I will look, listen, notice, respond, connect and explore the impact of walking, drawing and memory. I will examine how drawing might enquire and communicate the little differences I find that could reveal a link to specific place.

As I travel along this path I will be discussing my reasoning and purpose in more detail through a gradual expansion into a wider culture, returning with knowledge of elsewhere.

Soren Kierkegaard goes for a wander at the optimum pedestrian pace of three miles per hour he considers this to be the speed the mind functions well at.

But unlike Kierkegaard being ‘so overwhelmed with ideas he could scarcely walk’
I hope to bring this story back to the individual reader.