Visited Nov 2011
Words in Italics are from the booklet

Diversity - structured by various oppositions - unpredictable accumulations – contradictory -  gestural – mechanic . Impersonal paintings – readymade images - chance procedures - nature of appearance -capacities of vision. Contradictions and connections - continuities and breaks. Utopian abstraction - unbridgeable gap – compromised role - what are the capacities and limits of painting? Incapacities of painting. Blunt use of unmodified materials without any symbolic or narrative content -  arrangement was unfixed. Images disintegrate. Sense of discontinuity. Neither visible nor invisible – equivalent for indifference -  noncommitment -  absence of opinion - absence of shape. Impersonal surface – regulated structure – chance procedure. Non composition. Random juxtapositions.  Contemplation – paint would be pulled laterally and vertically - imperfect erasures, upper layers of paint dragged away, allowing earlier moments from the paintings creation to resurface. Untruthful. Personal significance. Rather than a linear narrative or a single canvas showing a decisive event - fragmented images with no fixed sequence. Repetitions and differences. The intimate and the monumental -  outcome of a destructive process - brutal erasures. Evoke experiences – grid structures. Juxtaposing accidental and intentional – accumulation of strokes and erasures. Questions about vision. Images are inflated, repeated and blurred - all knowledge of their references vanishes but an imposing impression of repetition remains - forms continue beyond the edges of the painting.  Sense of confinement rather than openness – repeated and reflected - rendered indistinct  - on the point of dissolution – obscures the identities. Rejection of intuition –  total randomness.

I decide not to read the gallery information first but to discover the drawings and paintings that I have a personal response to and that are relevant to my own research.

Sea-Sea  1970
There is something unusual and slightly awkward that at first is hard to understand but I am interested. It appears very different to the next sea and sky painting, executed in a similar realistic method. Why is there more drama, more pictorial or perspective distance and why does this somewhat heavier space disturb slightly. It’s a trick, taken from a collage of two different photographs of waves, the rougher of the two inverted and placed as cloudy sky, with the two horizons meeting and placed at eye level.
“The painting creates a sense of discontinuity and suggests Richter’s acknowledgement of the gulf separating him from the moment of Romanticism”.


I decide to wait here to see how other people might react to it:
I disregard those with headphones, they are merely following instructions, listening has priority over direct thought.
Some visitors read the label first, move back and take interest but are now aware of the trick.
However there are quite a few, that are immediately interested, stand in the centre of the canvas and move back and forth examining it carefully before reading the label. This painting definitely has the viewer’s spending longer in front of it than any other in the room. There is more discussion here. 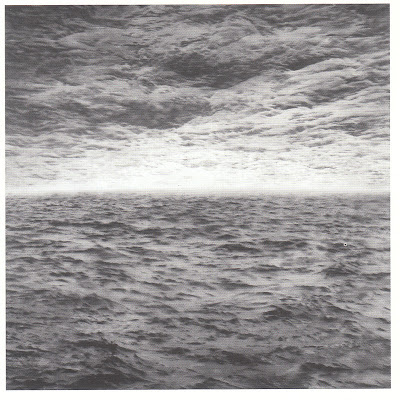 A series of recently found older mono prints are very simply made using the roller directly on to the lino. The black ink suggests landscape, as most have a near central divide invoking the horizon and reflections. A moon appears, almost by accident in several. The last few are slightly more involved with 3 tones of grey being used to create a moody atmosphere. A connection is evident to the large dragged abstracts.

Graphite on paper
These small intimate drawings contain the recognisable spaces found in Richter’s early large abstracts. The graphite drawings made since 1999 use minimal marks to explore invented space and distance.

Silicate 2003
Microscopic images of chemical compounds, magnified many times until they become blurred and any previous reference is lost. The two large grey Silicate paintings use the same images. The first is quite static with horizontal, regular rows of smudged dots that form simple pattern combinations. 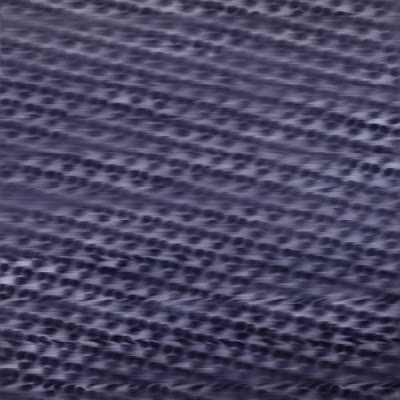