BBC
-The Genius of J.W. Turner.
Revolution - Industry/technology. Turner drew to observe, connecting the world to his drawings. Watched 29.4.13

Barbican
- The Bride and the Bachelors. Duchamp with Cage, Cunningham, Rauschenberg and Johns. Work that disturbs and redefines the distinctions between art and life in an eclectic mix of sculpture, painting, dance and sound. 2013

Marcel Duchamp’s first readymade ‘Wheel on Stool’, has no usefulness but is pleasant purely for the movement.
Experimenting with chance emphasises a visual indifference as it removes personal preferences. Three Standard Stoppages (1914) to be viewed horizontally.
A Straight horizontal thread, 1 metre long, falling 1 metre’ twisting as it pleases’ creates an alternative curved form but its identity, its length remains identical. 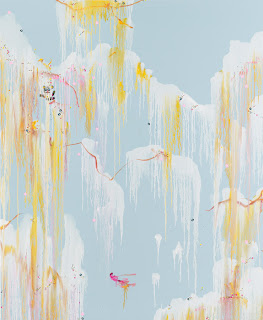 Fiona Rae I-need-gentle-conversations
Cultural Quarterly
- In the spring copy of Cultural Quarterly Fiona Rae talks about how she embraces the eclectic mix of visual imagery available with today’s immediate access to film clips, symbols and photos from across the globe. She draws on traditional and multi-cultural influences, combined with disassembled parts maybe from a science fiction movie or disintegrating cartoon panda. The paintings include evidence of their history and yet Rae ‘responds to and participates in the culture of our times’. Acknowledging these influences she talks about I need gentle conversations oil and acrylic on canvas, 2012:
‘It seems rather ethereal and a bit like a Chinese landscape painting, with veils of dripping paint and a few wispy brush drawings ‘.
Her paintings maintain their abstract discipline while ambiguity allows them to remain open to interpretation. 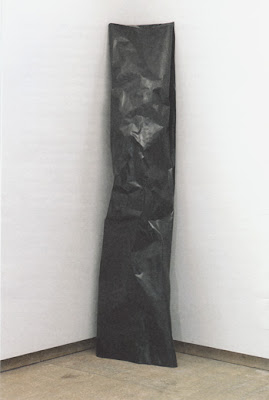 Silently lurking in the corner Anna Barriball Untitled II is no longer a drawing, the density, crease and crumple move it beyond its making as it occupies and influences a viewer’s response and is different to each in their perception.

Enter these enchanted woods,You who dare.

Walking through Druids grove today I feel how these ancient yews influenced his writing he often walked this path when he lived in the valley below.

Walking here is the subject of charcoal drawing- TQ 15807 53205 viewers commented on the Japanese/Chinese appearance of the markmaking and form. It was believed that an old masters frequent wandering liberated his imagination; time, space, structural and spatial relationships allow a viewer to follow this visual journey. Intuitive knowledge and intuition guides the composition prompting a viewers reading of early Japanese drawing but it remains important that the depicted image is never remotely topographical, the flat paper surface should be maintained to avoid it becoming illustrative.
A sense of surface is also continued along Japanese narrative scrolls, each image exposed as the story unrolls section by section, obligatory not to be viewed all at once.

Ikon Gallery
- Tony Arefin's graphics from the late 1980s. He often credited it Arefin & Arefin to jokily assume a corporate brand and imply multiple identities. The installation of his work gives the appearance of an open and accessible display and the innovative coloured metal concertina display shelf is an effective idea. 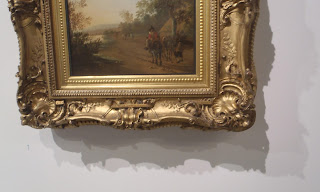 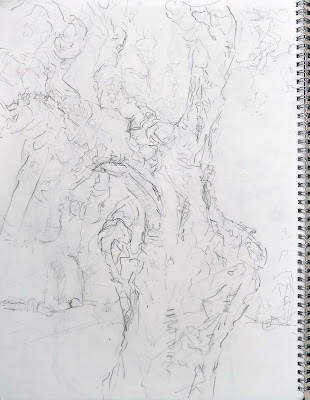 Hamilton's Cork Oak Jill Evans pencil on paper 2013
Painshill Park
- up to the Amphitheatre in this classical 18th century landscape to decipher and disclose the topography of Hamilton's ancient Cork oak.
http://www.parksandgardens.org/further-reading/conservation-and-restoration/226-painshill-park/424-painshill-park-the-restoration-of-a-classical-18th-century-landscape?showall=&start=4

PM Gallery
- Walk On- Forty years of Art Walking: 40 Years of Art Walking. Pitzhanger Manor Gallery. Ealing 27 March – 5 May 2013
We meet walking artist Simon Pope, we cross the park and chat without really noticing any scenery. He escorted us out of the park as his contribution in 'Walk On'. We re-enter and admire the blossom and trees on the way back, then sit at the kiosk, eat ice cream and people watch. 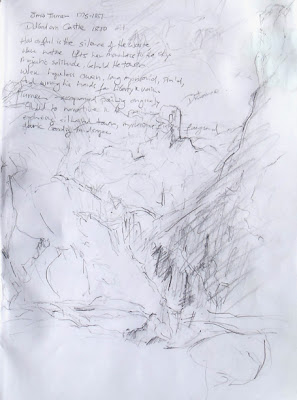 J.M.W. Turner Dolbadern Castle (1800) Jill Evans pencil on paper 2013
Royal Academy
- Constable Gainsborough Turner and the Making of Landscape. 2012 Turner intends to bring landscape painting to the fore, presenting his dramatic painting Dolbadern Castle (1800) with a written verse to emphasise drama without having to depict any historical events. Throughout his life he continuously applied knowledge and observation, validating landscape painting until his work implied all the event and drama required without the need of words.

- Looking at the View
http://www.tate.org.uk/art/artworks/gilbert--george-the-nature-of-our-looking-t03452

Gilbert and George FOREVER WE WILL SEARCH AND GIVE OUR THOUGHTS TO THE PICTURE WE HAVE IN OUR MIND.

- Mike Nelson- The Coral Reef. I was lost inside Mike Nelson’s ‘The Coral Reef’ at Tate Britain. Searching for the way back I find more rooms I don’t recognise there are no signs that might help my disorientation. It’s so quiet now, where has everyone gone? I wish I was with someone in here... I wonder what would happen if I had a panic attack... have I ever had a real one... how would I react if... with this thought I start to feel very scared. I have no idea how I would react if I lost control.The fear of being lost in there transformed my experience of an art exhibition but it is at that moment of being lost that the artwork becomes complete.
Go to 17 Jan 2012 for full account 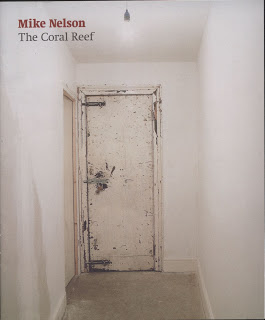 - Patrick Keiller 2012. The Possibility of Life’s Survival on the Planet. London: The Robinson Institute. Traversing the UK finding connections and linking history. 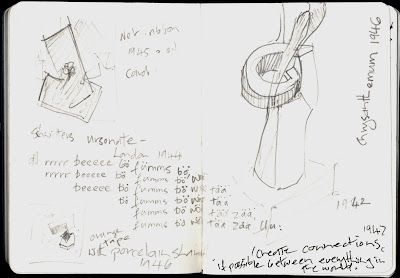 
- Schwitters in Britain 2013 Listening to Schwitters invented sound poetry Ursonate from 1944, it shrinks, expands and repeats continuously.
- Simon Starling– Phantom Ride. May 2013
- Gary Hume and Patrick Caulfield 2013 I unexpectedly admire the essential element of detail in Caulfields urban imagery. He picks out a simple contour line to construct these empty spaces that evoke an unseen human presence.
Hume creates a human figure from almost nothing, the left over bold shapes contain a massive presence in their simplicity.

Tate Modern
- Ellen Gallagher. AxME 2013 What a variety, this show needs some selection, is she a hoarder?
- Lichtenstein Retrospective I linger around the double images of Hinged Bin, open-shut, open-shut, I notice they are painted on two hinged panels and imagine it shut, it makes me smile.
I walk quickly past Lichtenstein's awful Late Nudes residing at number 11 to reach room 13, here Chinese landscapes relate to the early Song dynasty where their foggy bold simplicity fills the viewers visual field in atmospheric dottiness, altering the original Chinese concept of man's relationship to nature. It is now the viewers relationship to art itself, pointing towards its history and neatly clarifying his much earlier statement 'Art relates to perception not nature'. 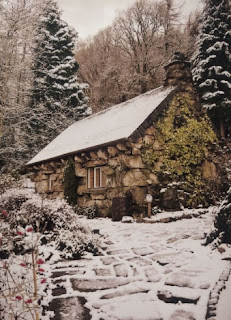 Wandering through the summer 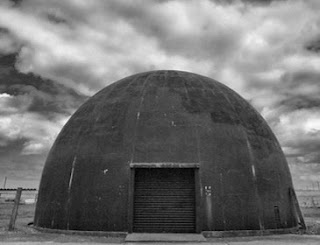 - Musician producer artist explains:
Hive is an investigation into and comment on how we deal with the increasing torrent of information with which we are confronted, and the choices we make in filtering that information’.
The immersive surround-sound experiences at Latitude hums with around 60 radios, each one is tuned to a different channel. The cacophony of sounds changes throughout the day as you listen, individual fragments might break out or you focus in more clearly to speech during the news, before the sound mix expands back out again. Almost becoming a demonstration of how the brain filters, locates and connects to the multiple sensations around.
Wimbledon Space
- Witnessing the Wilderness. 2013