Moving into lockdown, looking back to the future.

Reclaiming two offcuts of board I had put aside a few years ago, I notice there is something in these matching shapes that works, I recognise something there, like trying to recall a forgotten word. Changing them around I see a way to continue.
A simpleness in the symmetry emphasises their repeated form, these household materials appear almost naturalistic, creating a visual similarity to growth patterns in a shell, a chrysalis or maybe the traditional tetrahedral shape of a humbug.
I realise that this similarity is in the word humbug too. as a type of synesthesia, visually together but altered.
I also see how this comparison between natural process and waste products now relates to an earlier group of works.
In 2009, I made a series of small drawings around the idea of  'Ocean Crisis' after a return visit to Marloes cove in Wales. Concerned by the quantity of plastic debris I saw there, I took a twenty minute walk along the shore line collecting the plastic waste and later including it in a series.
Ocean Crisis 2009 and more recently in Sea Change.
I first saw Marloes cove in 1979 and had been absolutely amazed by its pure clean beauty, it was shocking to see the changes when returning in 2009.
I came across this Ladybird book at around the same time 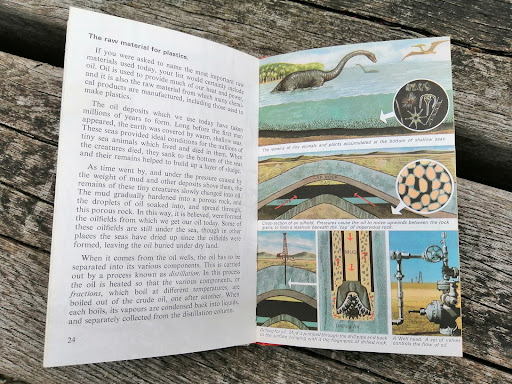 'The Story of Plastics' looked at the beginning of how plastics were changing the world.
Now we are trying to find ways to remove ithem from our oceans