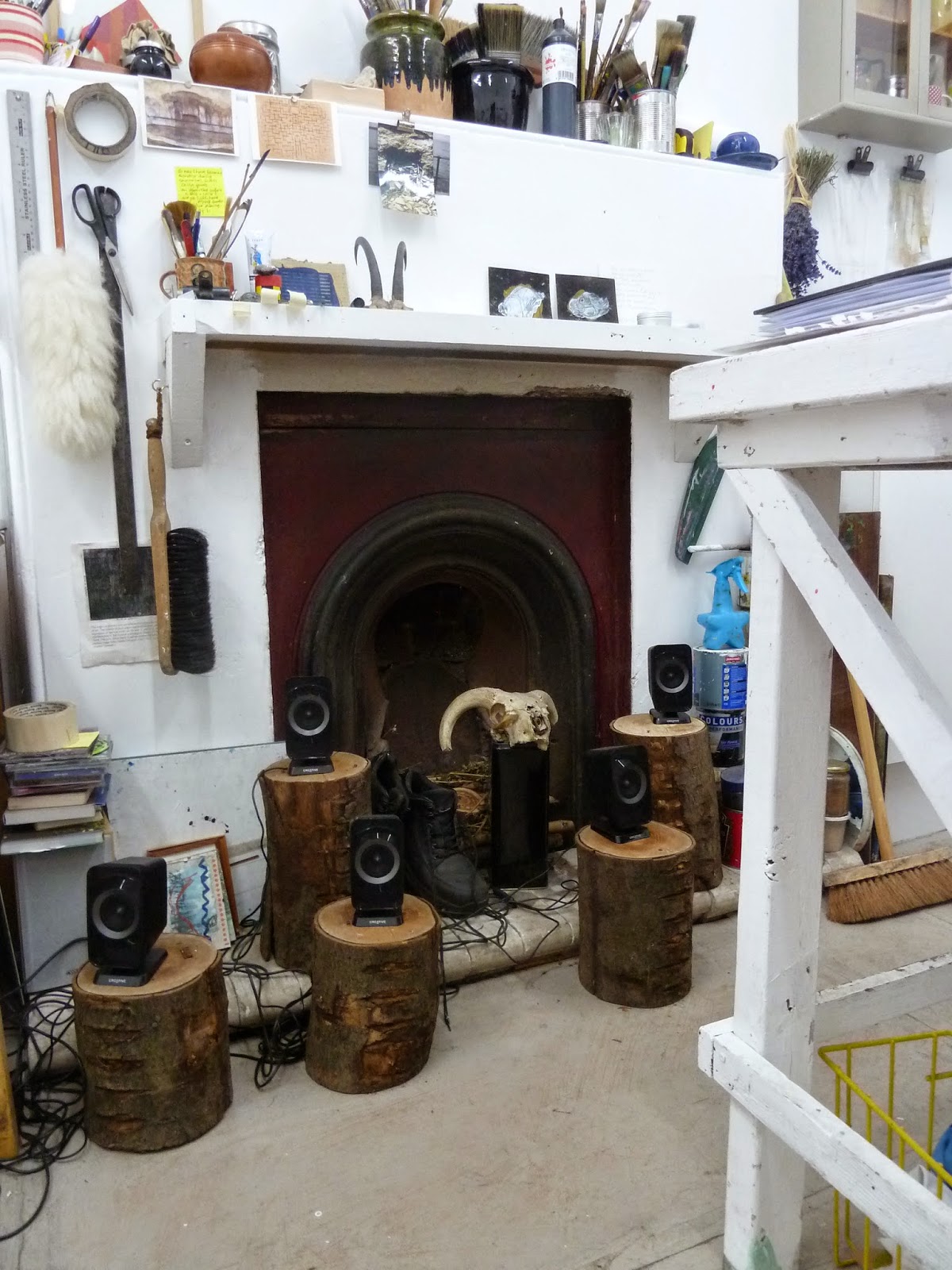 Listening again to my Sound Drawing 2013. I was showing it with my abstract drawings over the two day Oaks Park Open Studios this summer. It sounds a lot better in a big space. 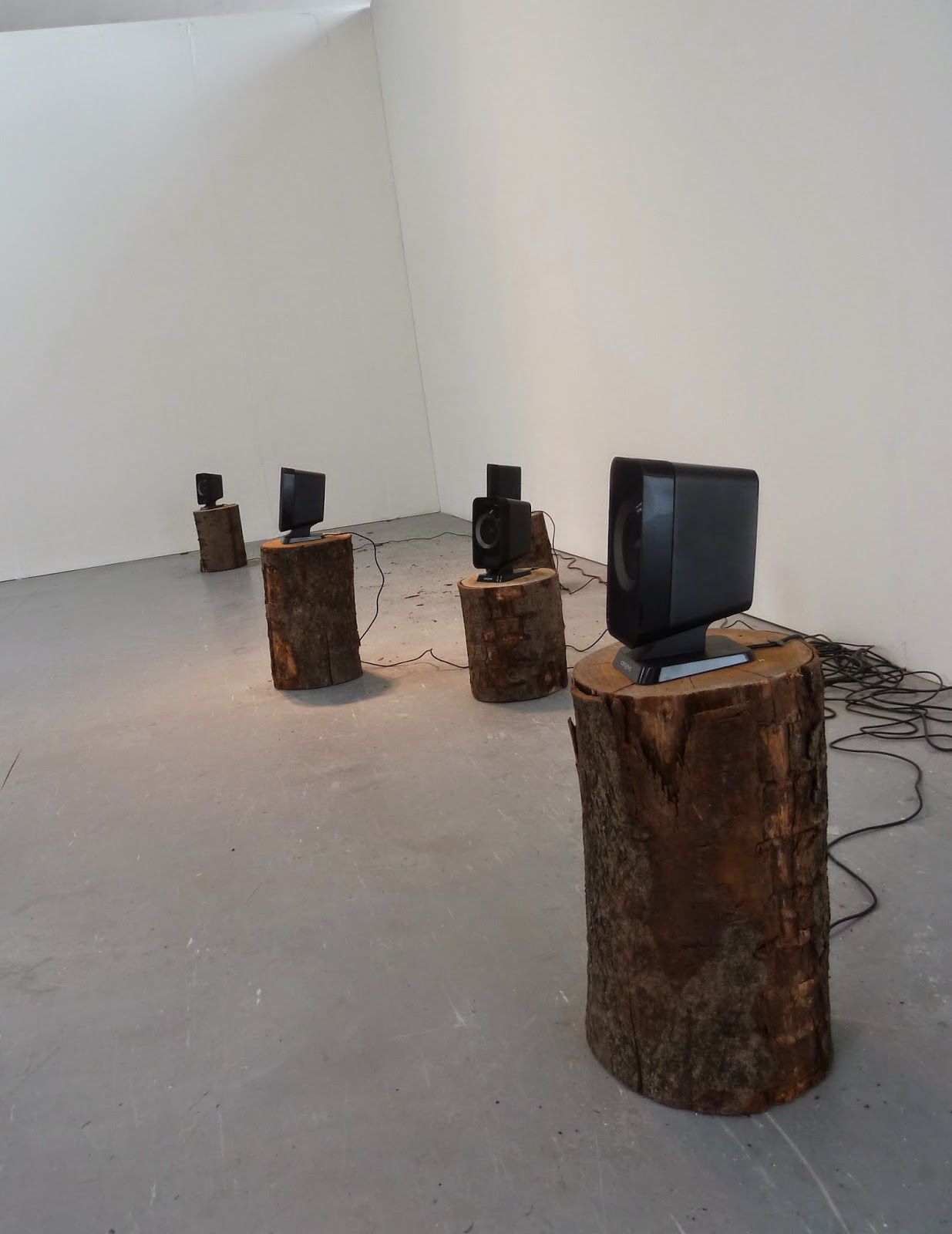 A sample can be found here:

The two days were packed with discussions. A little lad listening with his dad explained ( after his dad enquired about my sound drawing) ' The sounds are like charcoal and the drawings and the logs are burnt on the fire to make the charcoal', it's wonderful the way children can grasp easily just what they see.
I love this photo taken by Helen Goodwin of the MA show set up, as Alison Carlier and me dance to a section of sound drawing with the rhythm of fast walking downhill. 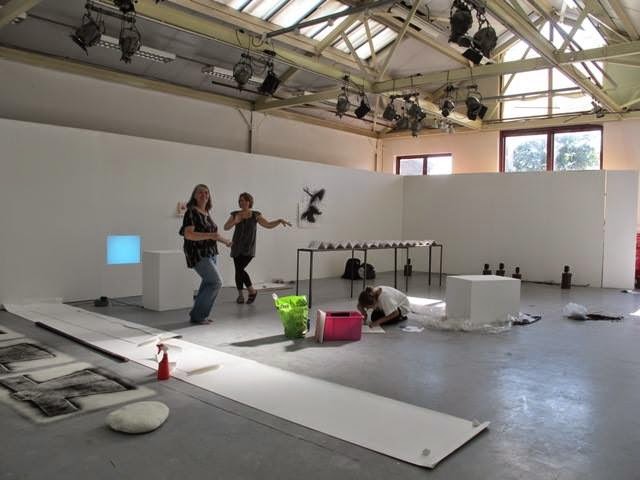 As a lady walks into the room she notices the trees outside and my quick tree sketches, as we discuss the Sound Drawing she recalls the memory of being unwell one day on holiday and remaining in her room became fascinated by the ever changing qualities of tree outside the window. On her return home, the photograph she took as a reminder was extremely disappointing, it captured nothing of her fascination. Every individuals memory of a place contains much more than the click of a static camera.

Abstract Drawing, a book, a scrap of fabric and an old skirt.


I attended the Abstract Drawing seminar at the Drawing Room in London, earlier this year. Richard Deacon spoke in detail with a careful search for his words. 'You draw as a witnessing activity' he says and considers abstract drawing is a work made purely for itself. He questions how we read the shapes and marks 'I am obviously a rule based person' 'interested in both lines and process', Deacon is finding his thoughts in a physical place as he speaks, drawing it out with his hands in silent gesture as he moves through his thoughts.

During the Q&A he asks do you think space is abstract or concrete? A very big question.

I remember this when gazing at the wonderful tiny pencil sketch in Malevich at the Tate Modern.

Last week I discovered a book on the abstract artist John Carter written by Chris Yetton in 2010 and published by the Royal Academy. These were both influential tutors when I was at Chelsea College of Art. I had many long and valuable discussions with John Carter at a time my painting was in transition.  Heuristic painted at this time was the beginning of my new work.


I was sad to hear of the death of Roger Ackling this year. He was also a very influential tutor at Chelsea and very kindly gave me this found scrap of fabric after an in depth tutorial. It was always wonderful and very helpful to speak to him.


My roots in abstract art are deep beginning with an abstract drawing screen print on calico from 1967.


Scrubby trees hide my studio from the park, a messy patch that no one notices
I stand and draw them quickly, taking note of how my eye moves over the scene. I do not see one still image but scan through many connections, sometimes focusing on a detail, how can I follow this with my pencil?


I find an old comment on CyTwombly describing his work with 'sparseness, clumsiness, awkwardness and rareness'. It is a decisive moment that gives each work meaning.

At Tate Modern I stand intrigued by the red hands in Malevich’s On the Boulevard, 1910. Large and clumsy they control the loose painterly figure where traces of reworking show through his translucent yellow suit, activating the still figure. A heavy rough outline emphasises a connection to the surrounding park and accentuates the solidity of his red hands again.
Filippo Marinetti’s ‘Futurist Manifesto’ on speed, technology and the cult of the machine in 1909, begins to emerge in Polishers 1911 with the rhythm of the lines moving, polishing and dancing over the picture surface.
The idea of mechanics is developed in the futurist opera Victory Over the Sun as Malevich’s costumes disguise the human figure turning them into machines. I am surprised at how much their form is changed as I know these design drawings well but have never seen the costumes made up. I watch and laugh, amused by the pendulum action of figures crossing the stage. I notice how the lighting adds to their disguise, it accentuates the forms, giving the figures a strong sketchy outline that reminds me of the man on the bench On the Boulevard.
Malevich’s simplified geometric stage design indicates
how he is ready to let go of representation and his simple black square is set to become iconic.
Suprematism – in Colour Masses in the Fourth Dimension the red square influences a stillness expressed by the black square above. It animates the surrounding white space and allows a reading of movement and stillness.
Supremeatism 1915 hangs higher than all others in the room. The diagonal blocks appear suspended in movement as they rise up, emphasising the yellow above.
In Works on Paper I am fascinated with one tiny pencil sketch, Suprematist Composition. It simply contains the universe possibly due to the almost unconnected parts, each containing it’s own quality and depth.

I see Malevich’s intense interrogation in Self-Portrait, 1933. His right eye dominant, as he now explores the viewer.
Posted by jill evans at 06:02 No comments: